Universitas Brawijaya and the Election Supervisory Body of the Republic of Indonesia (Bawaslu RI) officially cooperate. The inauguration of this collaboration was held in conjunction with the National Meeting held by FISIP UB in the Nuswantara Hall, Tuesday (19/5/2022).

The sign of the collaboration was directly carried out by the leadership of each institution, namely Prof. Widodo S.Si., M.Sc., Ph.D Med.Sc as the Rector of Universitas Brawijaya and Rahmat Bagja SH LL M as Chair of the Bawaslu RI.

The Chairperson of the Bawaslu RI, Rahmat Bagja SH LL M, appreciated the cooperation between the two parties. According to Rahmat Bagja, this collaboration will support Bawaslu program, which since 2017 has had a participatory monitoring center program.

“This program is one of the internships where students can concentrate on existing political realities, so students don’t think that the election is only for one day,” he said.

Rahmat Bagja explained that his party believes that students have the same passion to avoid money politics and hate politics.

“Indeed, as the Rector said, students can make KPU and Bawaslu a living laboratory. This politics is not only for students reading books but seeing the process firsthand, we open ourselves up, I’m sure the KPU will too,” he continued.

Rahmat hopes that FISIP as a cooperation vehicle between UB and Bawaslu can help students not only gain knowledge in class but also implement it in the real world.

“So we cooperate with stakeholders, both industry, business partners of government organs including Bawaslu, which are the main stakeholders for the development and model of education in UB,” he explained.

The Dean of FISIP UB, Dr. Sholih Muadi SH M.Si, added that this collaboration will support the Ministry’s program on Independent Learning of the Independent Campus (MBKM).

“This program expects students to not only learn theory but also practice and be recognized for up to 20 credits. Of course, this collaboration will be able to provide good input for us and good output for students,” he explained.

Dr Sholih Muadi explained that this collaboration will support FISIP whose laboratory form is not located in a room.

“Institutions such as Bawaslu, KPU or other government institutions can be a place for students to study directly there. They will understand the theory but also understand the reality on the ground,” he concluded. [FISIP/Humas UB/ Trans. Iir] 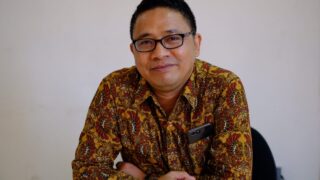