UB Maintain the Predicate of the Informative Public Agency 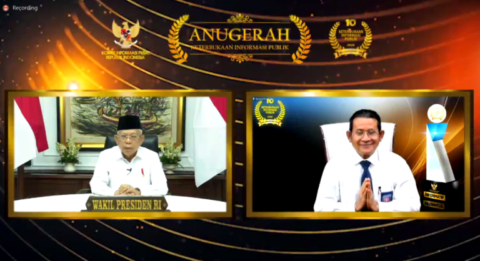 Universitas Brawijaya (UB) is able to maintain the title as a Public Agency for the Informative Category in 2020, and the award was given directly by the Vice President of the Republic of Indonesia, K.H., Ma’ruf Amin, Wednesday (25/11/20). This category is the highest in public information disclosure.
The Head of the Documentation and Complaints Information Center (PIDK) Zulfaidah Penata Gama, S.Si., M.Sc., Ph.D said it was not easy to maintain the informative category because there were several universities that were categorized as informative even though in the previous year they were in the informative category .
She added, before the award was given, the Central of Information Commission (KI) conducted monitoring and evaluation (monev) of public information disclosure at Ministry Public Bodies, State Institutions and Non-Ministerial Government Agencies, Non-Structural Institutions, Provincial Governments, State-Owned Enterprises, State Universities, and Political Parties.
The number of Public Bodies (including UB) which were monitored by Monev, as many as 348, while those participating were 291.
This award is given to the Central of KI every year to Public Agency that implement the Law No. 14 of 2008 on the Public Information disclosure.
The KI Center carried out Monev through the completion of Self Assessment Quetionnaire (SAQ) and in-depth study through presentations, then obtained the results of monitoring and evaluation.

As a result, the KI Center provides final assessments to Public Agencies in 5 categories (starting from the highest): informative, towards informative, moderately informative, less informative, and uninformative.
This result is a form of reflection and the condition of the implementation of public information disclosure at the Public Agency through monev.
One of the important indicators that became the benchmarks for the 2020 monev assessment was the innovation made by Public Agencies during the COVID-19 pandemic.
“During the pandemic, UB itself is very productive and does not die. Some of the innovations produced including the tough campus android application and the tough village and the APPATE sterilization robot, ”said Ida.
Ida said that Information Disclosure is not only about financial issues but also all matters related to UB including the achievements that have been achieved.
UB Rector, Prof. Dr. Ir. Nuhfil Hanani AR, MS welcomed the KIP award received by UB, and proved that UB’s information disclosure was very good.
“I hope that in the future it should be even better and there are innovations that can be developed to manage all information disclosure in UB,” he said.
Together with UB, universities that get the title as the Most Informative Public Agencies including Gajah Mada University (UGM), Padjadjaran University (UNPAD), Malang State University (UM), Bogor Agricultural Institute (IPB), University of Lampung, and the Ten November Institute of Technology. (OD / Humas UB/ Trans. Iir).