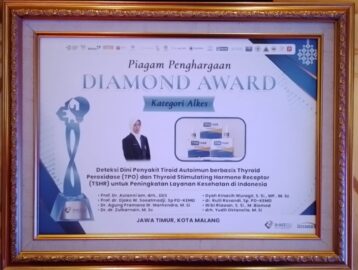 This award was given to Prof.Dr. Aulanni’am, drh., DES as the head of the research team on Thursday, (24/11/2022) at The Ballroom Djakarta Theatre.

“Very happy to be able to represent UB, researchers in particular, and research groups that have won twice. Thank God, this is an extraordinary teamwork,” said Aul, when met after receiving the award.

Prof. Aul explained that this award was the third time his team had won, after previously the GAD65 Rapid test received an award from the Vice President of the Republic of Indonesia and Indo HCF.

He explained that the thyroid would be too large for the congenital thyroid. This is because children born to pregnant women who have hyper or hypo thyroid are very vulnerable to stunting or malnutrition.

“So this test kit is very good to carry out. Why are we going to produce this tool as superior? because we know all this time the test for measuring thyroid levels is measuring t3 and t4 in the lab. Initially asymptomatic and laboratory tests on t3 and t4 could not show any thyroid disorder associated with autoimmune. So, this kit will be good because 1 kit assesses hypo and hyper,” he said.

This tool will be superior because it is in accordance with the government program which in 2024 the target is to reduce stunting by 10 percent.

“Then this test will be very good to do,” she said.

The IHI Award is a prestigious award in the health sector initiated by the IndoHC Forum in collaboration with the Indonesian Ministry of Health, BKKBN, BRIN, 16 health sector organizations, and supported by health product companies. This activity is in commemoration of the 58th National Health Day.

This prestigious event was opened by the Director General of Health Services, Drg. Arianti Anaya, MKM representing the Indonesian Minister of Health, was marked by striking a virtual gong.

This work is a research program of the RISPRO LPDP which has been running since September 2020 with funding from the LPDP – Ministry of Finance of the Republic of Indonesia. This early detection kit for autoimmune thyroid disease (AITD) with the TPO-TSHR marker is used as a tool for prevention of diseases caused by autoimmune thyroid disorders.

This research was realized by UB’s collaboration with PT Bio Farma (Persero) as one of the largest pharmaceutical manufacturers in Indonesia.

It is hoped that the use of the TPO-TSHR early detection kit can be utilized by the Indonesian people because the application is relatively easy, simple and does not require special complicated tools, so that it can be used in level I health facilities throughout Indonesia. In the next year, it is hoped that this kit can be marketed nationally and internationally as the work of the nation’s children from Universitas Brawijaya, concluded Aulannia’am.

“Now we are entering the clinical trial stage. If the results are good, we hope that in the future there will be more clinical trials. So that later it is hoped that next year it can be released to the market and can be used by the public, “said Widodo. (Humas UB/ Trans. Iir).