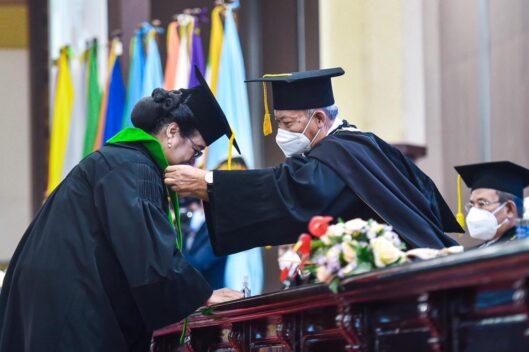 In her scientific oration, Siti Nurbaya delivered a novelty about Indonesia’s Forestry and Other Land Use (FOLU) Net Sink 2030, by providing a very focused development target; and for the first time in the history of forestry sector development, all program activities have the same indicator and unit of measurement, namely CO2e.

The previous performance targets used various units, such as hectares, m3, tons, and Rupiah. Indonesia’s FOLU Net Sink 2030 also encourages the performance of the forestry sector towards the same development target, namely achieving a GHG emission level of -140 million tons of CO2e by 2030.

“Indonesia’s FOLU Net Sink 2030 is implemented through a structured and systematic approach, developed by deepening the causal relationship between policies facing the global challenges of climate change control, so that Indonesia can provide an example of honesty that commitment is not just a pledge, but actually works on delivered commitments. , said Siti Nurbaya. 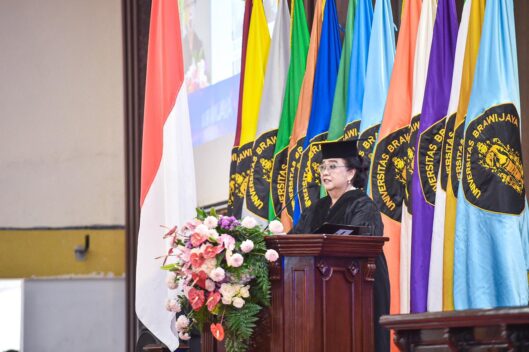 There are three main foundations that become the working modalities of Indonesia’s FOLU Net Sink 2030, namely Sustainable Forest Management, Environmental Governance, and Carbon Governance. All action steps have been designed in detail and integrated, in order to provide multiple benefits in the form of measurable reductions in emission rates, improvement and enhancement of forest and land canopy cover, improvement of various main functions of forests such as water management, microclimate, ecosystems, biodiversity conservation; as well as a contribution to welfare, equality and public health as well as the rule of law.

“The implementation of Indonesia’s FOLU Net Sink 2030 is a tangible manifestation of the commitment of the Indonesian forestry sector, not only on a national scale, but also its contribution to the world, to the global community, and as a legacy of the current generation to the future generations,” said Siti Nurbaya.

Meanwhile, the Rector of Universitas Brawijaya Prof.Dr.Ir. Nuhfil Hanani AR, MS revealed that the awarding of an honorary Professor title in the field of Natural Resources Management is the first time in UB Faculty of Agriculture.

“This field of science is very rare, not even five fingers in Indonesia. Congratulations to Siti Nurbaya and the family. Because to become an honorary professor, the criteria are extraordinary. Moreover, UB has gone to a world-class university,” said Nuhfil.

He also added that currently in universities, nationally and globally, there is an extraordinary competition. So, there is no choice but to improve the quality of education, one of which is by adding professors.

“I signed this Professor’s Decree in a third of the night while on duty in Dubai. Hopefully, this will be a sign of inauguration of the honorary professor to Mrs. Siti Nurbaya, adding to the blessings of science, service to the Nation and the State,” said Nuhfil.