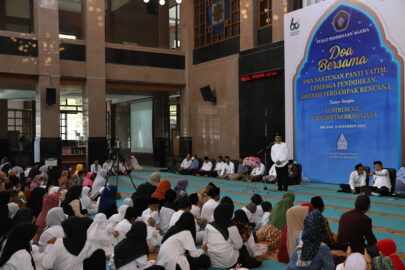 In the series of the 12th Lustrum celebration, the Center for Religious Development (PPA) together with BAZIS Universitas Brawijaya (UB) held an annual activity namely praying with orphanages and giving compensation to educational institutions and communities affected by the eruption of Mount Semeru in Pronojiwo area, Lumajang district. So far, the spiritual spirit of campus residents has always been present in the anniversary momentum from year to year, becoming UB’s commitment as a form of social service responsibility, especially for the surrounding community in need. This was conveyed by Muhammad Kholid Mawardi SSos, MAB, PhD as the 12th Lustrum committee of UB, Thursday (8/12).

One of the recipients of the funds was the Darul Aitam at Tagga orphanage in Sitirejo Village, Wagir sub-district, Malang regency. Slamet Riyadi, the caretaker of the Islamic boarding school, revealed that his institution has been invited by UB six times in every Anniversary activity, every funding he receives can help ease educational activities for children at school, considering that his institution does not have permanent donors. 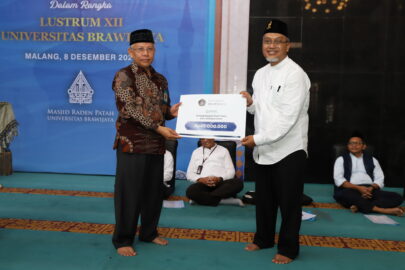 Especially for the people affected by the eruption of Mount Semeru, UB not only provides financial assistance, but also sends logistics and health workers. In addition, Mawardi added that campus had prepared an agenda for planting trees in Kepanjen area and the southern part of Malang city. According to him, community service must remain in line with concern for the environment.

Besides that, Vice Rector IV, Prof. Dr. Ir. Moch. Sasmito Djati MS hopes that this activity will be able to bring the academic community to have a better role in the future, not only through dedication and knowledge but also making a major contribution in international rankings. “The university is currently working hard to enter the world’s 500 best higher education rankings, because our journey is getting tougher in the future, spiritual efforts are needed to achieve it,” he concluded. [Humas UB/ Trans. Iir] 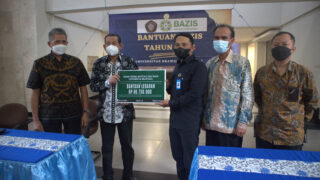