This lawsuit is related to illegal acts directed to RSUB, including violating environmental permits, building area that exceeds the permit, not having a building permit (IMB), and causing pollution / environmental pollution and congestion.

Presented to deliver this statement were the Director of RSUB, Dr.dr. Sri Andarini., M.Kes accompanied by UB attorney, Haru Permadi, SH along with the team of Universitas Brawijaya Law Service Office.

Andarini delivered the official decision of Malang City District Court on Tuesday (13/10/2020) which ruled that the lawsuit was unacceptable, so that the allegations argued by the plaintiff were not proven.

“UB or RSUB respect and obey the court decisions and statutory regulations.

All regulations and permits have been fulfilled by RSUB, since we are a Government Hospital, we try to obey all applicable regulations, “he explained. 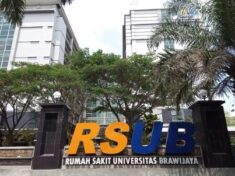 “Thus, the operation of RSUB has been carried out in accordance with the provisions, including the processing of liquid waste and B3 waste whose license extension was issued in June 2020 so that it is not against the law.

RSUB is built on state-owned land, not land owned by private / individuals / business entities, and not on public facilities / social facilities, “she explained.

Regarding the results of this lawsuit, Andarini will not file a counterclaim. According to her, it is better if RSUB and the people of Malang City can collaborate well with each other.

Meanwhile, Haru Permadi said that this step was an attempt to clearly explain to the public the truth and facts of the law. (Kanal24 / VQ/ Humas UB/ Trans. Iir)