In November 5th, 2022, a series of activities for the 13th Anniversary of the Faculty of Cultural Studies (FCS) Universitas Brawijaya (UB) was officially opened by holding four international seminars. The hybrid event took place in the UBTV hall, UB’s Rectorate Building, with the concept of Indonesian culture for the stage decorations, and all participants dressed in batik.

In addition to the invited native speakers, this international seminar which discussed current issues in the fields of language, literature, and culture also presented several speakers from Indonesia, America, Australia, UK, India, Pakistan, Japan, Malaysia, China, Norway, and The Netherlands. It was also attended by hundreds of participants from various countries.

“Thank God, this international conference was attended by more than 300 participants, with participants from inside and outside Indonesia,” said Hamamah, Ph.D., Dean of FCS UB, in her speech.

The inauguration of the 13th Anniversary of the FCS UB opening ceremony was symbolized by the beating of the gong by the Vice-Rector for Finance and Resources, Prof. Drs. Gugus Irianto, MSA., Ph.D., Ak.

Then, FCS UB presented a Panji Asmorobangun Masked Dance of Malang, accompanied by a group of students who played a set of gamelan musical instruments or commonly called karawitan.

Not only enlivened by cultural performances but this event was also attended by talented artists, such as Cak Kartolo and Mbah Barjo who were the awardees of the 2022 Sabda Budaya Award (ASB), which was held simultaneously with the opening of a series of international seminars of FCS UB.

In this event, Okky Madasari, a novelist from Magetan , was also chosen as the ASB awardee for the Literature Category. The awardee for The Category of Traditional Art was Cak Kartolo, a Ludruk artist from Surabaya. While the Creative Process Incentive Category awardee was Barjo Jiono, an artist who preserves the Jambuwer Malangan Mask Dance.

“The ASB aims to honor those who have made a variety of interesting and characteristic arts and cultures in Indonesia,” said Hamamah.

Okky Madasari as the awardee also showed her gratitude.

“Thank you for the trust and ASB award given to me from FCS UB, I hope that in the future Indonesia will produce more talented young artists and culturalists,” she said.

In addition, there was also the performance of the Jambuwer Malangan Mask Dance by Mbah Barjo’s art student which further supported the concept of the event. After that, the event continued with the core of the seminar activity, namely the presentation of material or webinars by the invited native speakers for two sessions. 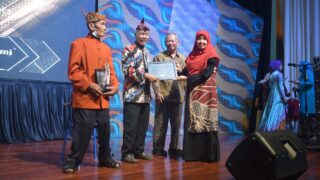 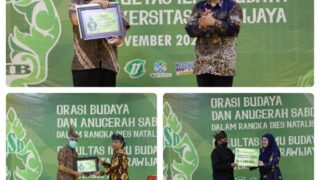