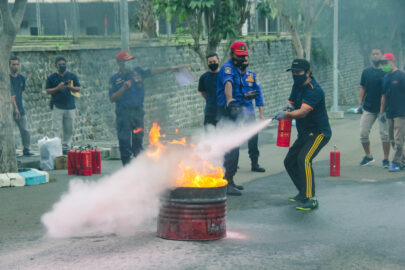 Early prevention efforts of fire disaster have been able to reduce the risk of accidents in dense urban settlements and offices. Therefore, the General and Equipment Division holds a Socialization of Fire Disaster Mitigation and Management as a form of mitigating the risk of disaster in UB Campus. The activity was held on Friday-Saturday (29-30/10/2021) at Ascent Premiere Hotel Malang and UB Campus II Dieng for practical activities.

Before the material presentation by the Malang City Fire Department (PMK), Sub-Coordinator of Household, Mardiantono, S.Sos reported that this socialization was attended by 100 participants consisting of building guards, security officers, cleaners and parking attendants in UB. The purpose of this activity is to provide understanding to human resources in UB to be responsive to fire hazards.

“Because it’s possible there will be a fire so with this activity, participants will be responsive in the event of a fire and become the front line to try to extinguish the fire before the firefighter arrives. We don’t want what happened some time ago in UB to happen again because the officers still lack knowledge of fire mitigation and management,” said Mardiantono.

If a fire occurs in the office environment, employees are asked to not panic and try to find a safe distance from the hotspot. Each office usually has formed a disaster management task force, which includes fires. The task force acts according to public safety protocols if fire disaster happens.

Every employee is asked to remain calm but be aware if an emergency situation occurs. Most of the victims caused by the fire itself were caused by the panic attack situation experienced by the victim, resulting in accidents when the fire occurred. If a fire occurs, the disaster task force of each unit/office coordinates and evacuates employees who are still within the “danger” area.

In addition to material presentations by firefighters, participants were also given the opportunity to simulate in real terms on how to extinguish a fire if it happens in the surrounding environment. One thing to be aware of is to remain calm and not panic in the event of a disaster, especially a fire. Panic will usually cause a minor disaster in addition to a major disaster such as a building fire. Minor disaster is a small disaster that occurs outside the main disaster event, especially when the main disaster occurs, for example an accident when a disaster occurs.

Several ways that can be used in order to deal with fire disasters include the use of a light fire extinguisher, the use of wet cloth/burlap sacks, and the use of hydrants and all participants have practiced using these tools.[dp/ Humas UB/ Trans. Iir] 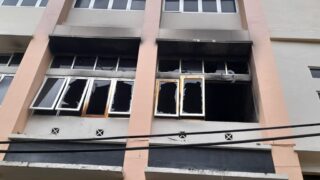