The Center for Research Development of the Criminal Justice System Universitas Brawijaya (PERSADA UB) held an online training with the theme “Criminal Procedure Law Reform In The Netherlands and Indonesia”. This webinar was conducted in a series, where the first series was held on Wednesday (11/05/2022). This activity is a collaboration between PERSADA UB with Institute for Ciminal Justice Reform (ICJR), Instituut voor Strafrecht & Criminologie Faculteit der Rechtsgleerdheid Universiteit Leiden, and Nuffic Neso-NL Alumni Network Indonesia.

The activity, which was attended by 100 selected participants from academics, lecturers, and researchers throughout Indonesia, aims at discussing the development of criminal procedural law reform, the dynamics of legal reform in Indonesia and the Netherlands, as well as the basic principles of criminal law to the participants. .

The Secretary of the Institute for Research and Community Service (LPPM) UB, Dodi Wirawan Irawanto, S.E., M.Com., Ph.D when opening the event said, as one of the study centers under LPPM, PERSADA is expected to be a center for multi-disciplinary studies related to issues on justice system and criminal law enforcement.

“The online upgrading series which collaborates with Leiden University in the Netherlands with the support of NUFFIC NESO is an internationalization step that is in line with the work program of LPPM UB,” said Dodi.

Head of PERSADA UB Fachrizal Afandi, S.H., M.H., Ph.D in the introduction to the discussion said, this online training series aims at updating and upgrading the knowledge of lecturers and activists of criminal law and human rights related to the development of principles and concepts of criminal procedural law in Indonesia and the Netherlands so that it can participate in advocating for changes to the Criminal Procedure Code, which has not been amended since 1981.

“With this online upgrading, it is hoped that academics can be more active in encouraging changes to the Criminal Procedure Code that are more humane,” he said.

Prof. Topo Santoso, S.H., M.H conveyed that the existence of the Criminal Procedure Code in Indonesia is based on national and state philosophy so that it must be able to properly reflect regulations related to human rights. One of them is to give equal treatment to everyone in the eyes of the law without any discrimination.

This fair treatment is not only interpreted when dealing with suspects and defendants who may have differences in social status or wealth, but must go beyond that.

“The meaning of  fairness here is not discriminating against differences in ethnicity, religion, race, gender, differences in political opinion, social status, and other statuses,” said the UI Professor of Criminal Law.

Prof. Topo Santoso also conveyed several other principles in accordance with the implementation of the Criminal Procedure Code in Indonesia.

Meanwhile, Prof. Pinar Olcer conveyed the changes in the Criminal Procedure Code in the Netherlands, one of the most recent of which is digitalization and the effective use of technology in law enforcement process, especially in investigation authority.

One that is currently being developed is the Law on Sexual Offences by changing the paradigm while respecting responsibility in criminal law, reducing risks and the role of the state.

One of the participants from The Asia Foundation, Carolina Sophia Martha admitted that she was very enthusiastic about this activity.

“This lecture is very interesting and enlightening, thank you very much for sharing the updated knowledge and insights,” she said. 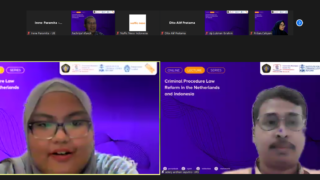