“In this morning, we together remember or commemorate a major event in the history of His life, namely Isra ‘& Mi’raj”. Said Aulia Luqman Aziz, M.Pd as the moderator of this event. “Today we want to take, we want to learn together, what is the wisdom behind the Isra ‘Mi’raj incident, what we can learn together and then we try to apply it,” he added.

This activity was filled by Aulia Luqman Aziz M. Pd as moderator, Ustadz Moh. Irham for reciting the Tilawatil Qur’an. And opened by the Rector of Universitas Brawijaya, Prof. Dr. Ir. Nuhfil Hanani AR., MS., with the speaker, Ustadz Wijayanto.

“I still remember of being given a book by my friend entitled “Tanbihul Ghafilin”, a warning for people who forget. Indeed, as humans, we must be reminded, one of which is to commemorate Isra ‘Mi’raj of the Prophet Muhammad SAW. Hopefully this meeting reminds us that this Isra ‘Mi’raj, one of the wisdom is the great Prophet Muhammad SAW received a direct order from Allah to pray 5 times a day, which initially 50 times, get a 5 times discount that by God willing, the reward is equal to 50 times. “Said Nuhfil in the opening of Tabligh Akbar.

“Hopefully by commemorating this, our devotion, our faith, our charity will increase and our Islamic brotherhood will be more increased as well”, he concluded ending his speech in the opening of Tabligh Akbar Isra ‘Mi’raj of the Prophet Muhammad SAW 1442 H.

Meanwhile in his lecture this time, Ustadz Wijayanto explained how we contemplate the meaning and wisdom of Isra ‘Mi’raj during the Covid-19 Pandemic like today.

Second, he added that crisis causes folartility, meaning that there are extraordinary changes, the changes are not just changes in one aspect, but all aspects of life, so people experience uncertainty.

Ustadz Wijayanto added, “We are experiencing a Juggernaut condition, according to Anthony Giddens’ theory. This is like a loose person who gets on a bus, but it is not strong and the brakes are not working, then he will get off, when he gets off, then everyone experiences uncertainty, not only in the bus, but everyone who will miss, can be right, can be left, can be straight, it experiences uncertainty. This uncertainty is what makes us something that has to act well, ”he explained.

In this uncertain condition, Wijayanto hopes that humans will not lose control. “So the Prophet in Mi’raj, first in Isra ‘, then in mi’raj. So this Isra ‘& Mi’raj event is an invisible event, an event that does not make sense because many disbelievers used to think the prophet Muhammad was drunk. Is it possible to go far between Mecca and Palestine in one night? Now alone it can take a day and a night. Moreover Mi’raj, something Kholikul’adah that is out of the ordinary. So only the verse in Al Isra’s verse 1 begins with the words Tasbih. This shows something that is outside of custom, although similar things happened in the previous prophets, “he continued.

Even though the webinars and live streaming are sometimes hampered by an unstable network, this activity lasted for more than 2 hours with great wisdom and joy, and was watched by more than 500 participants. (Rizki / VQ/ Trans.Iir) 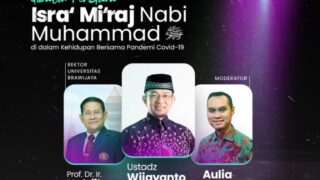