Lestari and Dawai Cempluk Have Succeeded in the International Event

The song LESTARI and the Village-Based Instrument (Dawai Cempluk) performed by the Etnicholic Duo (Redy Eko Prastyo and Anggar Syaf’iah Gusti) won at the Sopravista International Festivals.
The video clip with the song Hijau Lestari from Duo Etnicholic was uploaded on the iRL Gigs youtube channel program, a channel containing non-mainstream music works from Malang.
The YouTube channel was then included in an international cultural festival event SOPRAVISTA INTERNATIONAL FESTIVALS in ITALY.
Redy admitted that he and Anggar did not have big hopes of being nominated and even winning the competition considering the many participants with the various nominations selected. 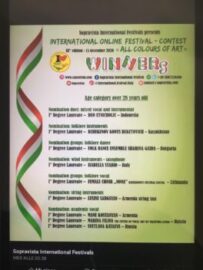 “Anggar and I didn’t really expect to win. It turns out that on December 23, 2020 a friend sent a WA message, and captured the announcement that the Etnicholic Duo won the mastermind of the event as 1 DEFREE LAUREATE NOMINATION MIXED VOCAL AND INSTRUMENT, “said Redy.
Meanwhile, Cempluk Dawai is the name of an instrument made by residents in Cempluk Village.
Cak Budi Ayin is one of the composers of this instrument who works as a carpenter, construction worker painter. Making this instrument he learned a lot from watching Youtube, being self-taught, with simple equipment including badik, saw, hammer, choke tool, there is no modern equipment, all Hand Made manually.
“There are about 30 cempluk string instruments that are made in various shapes. On December 28, 2020 to January 1, 2021, Cak Budi Ayin will participate in the Art Market at the Malang Arts Council, and the instruments will be exhibited at the event and also receive orders if anyone is interested, “said Redy, who has been accompanying Cak Budi Ayin for the past year.
For their victory, Redy and Anggar, who are staffs under the UB Academic Business Unit (BUA), will have the opportunity to come to Italy to participate in the event in 2021. (* / Humas UB/ Trans. Iir).