59th Anniversary: UB Targets to be an International Reputable University 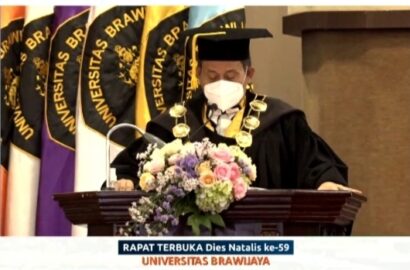 Universitas Brawijaya (UB) held an Open Meeting in the context of 59th Anniversary. The activity, which was held on a hybrid method, was also attended virtually by the Vice President of the Republic of Indonesia, KH. Ma’ruf Amin, Wednesday (5/1/2022).

UB Rector, Prof. Dr. Ir. Nuhfil Hanani, A.R., M.S., also explained that there are several strategies or steps for UB development program that have been prepared since 2019.

The former Dean of FP added that the number of internationally accredited study programs this year has reached 60 percent. So that the target of accelerating international accreditation can be achieved.

The Vice President of the Republic of Indonesia (RI), K.H. Ma’Aruf Amin in his virtual speech explained that UB’s efforts to achieve international accreditation need hard work and support from all parties.

“I really support UB’s efforts to achieve international accreditation so that later it can compete at the ASEAN, ASIA, and world levels. I hope that UB can also provide space for underprivileged students to study in higher education,” he said.

The Chief Executive of the Open Meeting, Denny Sagita Rusdianto, S.Kom., M. Kom said that the Open Meeting in the context of UB’s Anniversary this time raised the theme “Resilient and Creative Work in a Pandemic Period to Achieve International Reputation”.

“So the hope is that even though the condition was a pandemic and thought we couldn’t do our activities optimally, UB tried to achieve an international reputation by increasing international publications,” he said.

Denny added, with the new status from BLU to PTNBH, there will be many adjustments so that the achievement of international reputation will be faster.

“With UB’s status as PTNBH to achieve an international reputation, the efforts made besides publications including collaborative collaborations, student internships, so that UB is better known to the public in domestic and abroad,” he said. (OKY/Humas UB/ Trans. Iir). 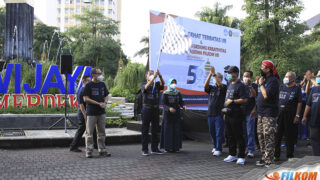