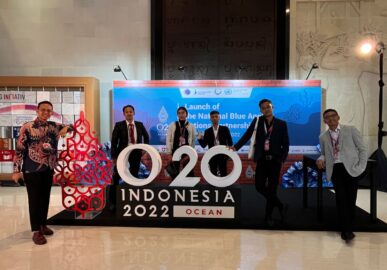 Turning waste into money. This is the concept of BuangDisini, a startup engaged in waste management in Malang City. BuangDisini is a collaboration of M. Zaidan Akbar, Hiegar Ramadani and Konsihka Koeswara. The three students from Universitas Brawijaya also collaborated with Rezha Varianto from Prasetya Mulya and Arga Wicaksono from Trisakti University for the development of BuangDisini.

BuangDisini is the only startup company contributing to B20, which focuses on investment forums and is part of the G20 Presidency series last Wednesday (16/11/2022). According to Zaidan as the COO of BuangDisini, the student team’s participation was initiated by an interest in the circular economy. “We are interested in joining the World Economic Forum, there is an opportunity for our company because the topic is about a sustainable environment and circular economy,” explained this 2019 FTP student. 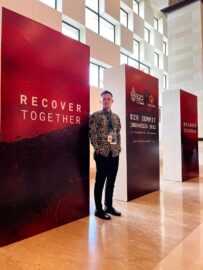 From the application to join B20 and Ocean20, we were selected and invited by the WEF and included in their database, so that we were registered at this B20 Summit,” he added. Also on this occasion, Zaidan and friends had the opportunity to network with various parties in B20.

“BuangDisini is the only startup from Malang City that participated in B20 and O20. Ocean20 itself is a limited forum and we have the opportunity to be part of this forum.”, he added. Through this forum, Zaidan and the team had the opportunity to introduce BuangDisini to delegates, both from within and outside the country, as well as build networks.

“There are several participants who are interested, we are also establishing networking with venture capital, plastic manufacturers, renewable energy companies for waste supply, collaboration, partnerships, access and many more. In the near future, we will launch an application for converting plastic waste into money in Malang City, and establish cooperation with several villages and companies,” he concluded. (Humas UB/ Trans. Iir)