Having a leadership spirit is an added value for students. Likewise Noorsy Zidna Nabiela, a student of the Department of Management, Faculty of Economics and Business, Universitas Brawijaya.

“During the program I was given the opportunity to coordinate my friends for the implementation of the Engagement n Enrichment series agenda or interactive class via zoom, with some prepared materials, then beside the 2E Series agenda I led the KMBI Take Over The Class project, held meetings, looked for themes and speakers according to the needs of the class,” she explained. 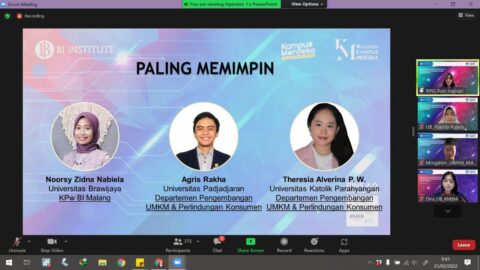 Besides being a participant, Noorsy also acts as the head of the class, so she is often involved in completing various projects at KMBI, especially at BI Representative Office in Malang.

This hijab-wearing woman is also active in various strategic BI Malang events, such as Economic Forum Malang Raya, Proud of Indonesian Tourism, Sharia Economic Festival, Techibition and others. “The assessment of the award is carried out by KMBU team from BI Institute. Meanwhile, the internship assessment is done through the completion of individual modules, group assignments and research reports,” said the 2018 batch student.

Regarding the research carried out, Noorsy chose the title “Digitalization of MSMEs as a Result of Marketing Communication Innovation to Create New Sources of Growth during the Covid 19 Pandemic (Study on MSMEs assisted by KPw BI Malang). “This research discusses the implementation and role of BI Malang to create digitalization. MSMEs, by holding training and various events, such as Indonesian Creative Work Activity which generates a turnover of up to 5.12 billion in 2021,” she explained.

According to Noorsy, the selection of MSMEs as research objects was because she was often involved in MSMEs training or Islamic boarding schools. “I happened to be placed at KPw BI Malang, in the Implementation and Development Function of MSMEs work unit, Inclusive Finance and Sharia Economics. So I am close to MSME development activities,” she concluded. (VQ/ Humas UB/ Trans. Iir)